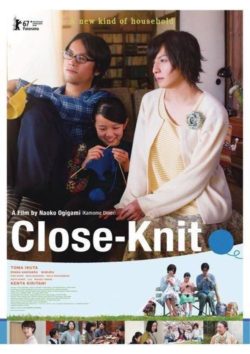 One spring Hiromi, who is the mother of 11-year-old Tomo, leaves home for the umpteenth time. Tomo is accustomed to this and, as always, goes to her Uncle Makio’s place. He is a brother of Hiromi and lives with Rinko, his girlfriend. Rinko is a transwoman who works as a caregiver in a nursing home where Makio’s mother Sayuri, who suffers from dementia, is living. Rinko makes delicious meals and comforts Tomo. Tomo, Rinko and Makio start to live a life together. One day Rinko teaches Tomo to knit to control her temper. Rinko was also taught by her mother at the age of puberty when she struggled with her sexuality. A daughter neglected by her mother. A gentle uncle and his transgender lover. An angsty boy struggling with his own sexuality. “Knitting” reorganizes unconventional family.

sold at the door or by clicking here